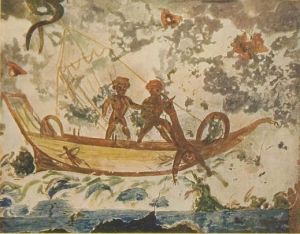 The prophet Jonah being thrown into the sea, from the catacomb of Priscilla.

The prayer, or psalm, of Jonah in chapter 2 contains some hints that the writer was attempting to clearly identify Jonah as a prophet of the northern kingdom of Israel.

In verse 4 Jonah prayed “I am driven away from your sight; yet I shall again look upon your holy temple.” Later, in verse 7, he said “When my life was fainting away, I remembered the Lord, and my prayer came to you, into your holy temple.” This second reference to “your holy temple” makes it clear that Jonah was thinking of heaven rather than the temple in Jerusalem. He goes on to pray “But with the voice of thanksgiving I will sacrifice to you” (וַאֲנִי בְּקֹול תֹּודָה אֶזְבְּחָה־לָּךְ). The text uses the verb for slaughtering animal sacrifices (זָבַח), but it seems to me to be ambiguous about whether  the  “voice of thanksgiving” accompanies the sacrifice or is a substitute for it. If it is a substitute then this is a direct rejection of animal sacrifice, and therefore the temple cult, with a substitution of ‘thanksgiving’ as an acceptable sacrifice. We might expect to find such comments on the lips of a northern prophet, or from the pen of a writer who wanted to make his character sound like a northerner.

Having said that, I should also point out that Hosea, a contemporary of Jonah’s in the southern kingdom of Judah, said that God desires “steadfast love and not sacrifice (זֶבַח), the knowledge of God rather than burnt offerings” (Hosea 6:6). Amos, another contemporary southern prophet also spoke sarcastically of “a [sacrifice of] thanksgiving of that which is leavened” (וְקַטֵּר מֵֽחָמֵץ תֹּודָה Amos 4:5 – this text does not include the word זֶבַח = sacrifice) in a prophecy addressed to the northern kingdom of Israel.

There are two issues here: