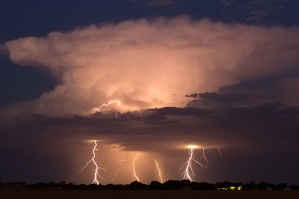 Psalm 29 may be one of the oldest psalms in the Hebrew Bible. Its beginning is set in a heavenly council and is addressed to the בני אלים “sons of Elim”. This terminology is very similar to Psalm 82:1 and Psalm 89:6-7 which respectively refer to the עדת־אל “council of El” and the בני אלים “sons of Elim”. These texts in turn are similar to the frame narrative of Job which is partially set in a divine council of the בני האלהים “sons of ha-Elohim”; and the narrative of the interbreeding of the בני־האלהים “sons of ha-Elohim” with the “daughters of men” in Genesis 6.  Some scholars have noticed the similarity of this divine council with the Canaanite myths of the council of El.1

The central section of Psalm 29 describes the voice of the LORD in terms of an intense storm which forms over the sea (“the waters” and the “many [or mighty] waters” in verse 3 probably means the Mediterranean Sea) and then moves eastwards over the land (Lebanon, Sirion [Mount Hermon] and on to Syrian Kadesh), following the east-to-west pattern of weather in Canaan2 and breaking the cedar trees in its path (v. 5) and stripping the forests bare (v. 9), causing animals to flee (v. 6) and in their terror to prematurely give birth (v. 9), sending bolts of lightning (v. 7) and making the ground to shake (v. 8). In a striking parallelism the psalm refers seven times to “the voice of the LORD” and after the first use of this expression says “the God of glory (or, “the Glorious El”) thunders”. John Day saw this as reminiscent of the seven thunders of Baal in Ugaritic poetry3, specifically in the following lines from two poems:

And you [Baal], take your clouds, your wind, your chariot team, your rain, take with you your seven servitors and your eight boars, take Pidriya daughter of dew with you, and Taliya daughter of showers with you. (CTA 5.v. 6b-11)

The identity of the “seven servitors” and “eight boars” here is uncertain, but because the other metaphors in this section of the poem are meteorological so Day takes them to be the same as the “seven lightnings and seven thunders” mentioned previously. Psalm 29 concludes with the ‘enthronement’ of the LORD and Day observed that the Ugaritic text RS 24.245 commenced with a similar enthronement statement:

Baal sits enthroned, having the mountain as a throne, Hadad (the shepherd) like the flood in the midst of his mountain, the god of Zaphon in the (midst of) the mountain of victory. (RS 24.245 lines 1-3a)

Several scholars have noted the similarity between the language of Psalm 29 and Ugaritic poems about Baal. For example, Tremper Longman III asserts that

It is well known that the Canaanite god Baal was a storm-god. He was the one who dispensed rain, flashed lightning, and created thunder. Psalm 29 pictures Yahweh as a storm-god in language reminiscent of Baal.5

There is a possible intertextual link between the “seven voices/thunders” of Psalm 29 and the apocalyptic New Testament book of The Revelation where the narrator heard an angel call out “with a loud voice … When he called out, the seven thunders sounded” (Revelation 10:1-4). The use of the definite article suggests that there were seven specific thunders he had in mind. Elsewhere he heard seven angels blow on seven trumpets “and there were peals of thunder, rumblings, flashes of lightning, and an earthquake” (Revelation 8:2-5). The similarity in the language suggests that the writer either had the language of Psalm 29 in mind (and the Psalms are among the most quoted biblical books in early Christian literature), or was drawing on the same pool of metaphors which inspired the writer of Psalm 29. The mention of seven trumpets along with seven thunders and the frequency of Temple imagery in The Revelation further suggest that the writer may have been referring to a liturgical use of trumpets in connection with the language of Psalm 29, and I will return later to this connection.

4 Day understands the juxtaposition of ‘seven” and “eight” to be a poetic device for emphasis meaning “seven”, hence “seven lightnings and seven thunders”.

One comment on “In praise of the storm god (1)”

Leave a Reply to Psalm 29 - A Plain Account Cancel reply