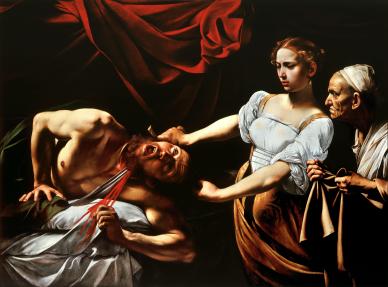 Some readers of the Bible may ask “I know who Esther is, but who is Judith?” That’s because the Book of Judith isn’t in most Protestant Bibles. It is accepted as canonical (“inspired Scripture”) by the Orthodox and Catholic churches, and as Apocryphal by others (including the Anglican and Lutheran churches), but is excluded from Jewish and Protestant Bibles. If you haven’t read it I’d recommend it as a great piece of Jewish literature and story-telling from the Maccabean period (probably around 135-104 BCE). It’s relevance here is that it has been said of the book of Judith that “No biblical book is so quintessentially ironic as Judith” [1]. Moore describes the writer as “an ironist extraordinaire” who often means the opposite of what he says. The books of Judith, Tobit (also deuterocanonical, or Apocryphal) and Esther are very similar in style and in the literary techniques used by the writers. They are early forms of the “novel”. By understanding some of these techniques in Judith we can gain some insights into the intentions of the writer of Esther.

The first thing which strikes us when reading Judith is that it has all the trappings of historical narrative, but a reader who is familiar with biblical history will quickly note several historical and geographical inaccuracies, so many, in fact, that it becomes fairly certain that the writer’s carelessness with the facts was deliberate. While the story has a believable plot, someone even casually acquainted with Jewish history will recognise several discrepancies. For example, the story begins “It was the twelfth year of the reign of Nebuchadnezzar, who ruled over the Assyrians in the great city of Nineveh” (Judith 1:1). Most readers of the Bible will know that Nebuchadnezzar was king of Babylonia, not Assyria, and some will know that Nineveh had been destroyed several years before his reign began. The twelth year of Nebuchadnezzar would have been the fourth year of Zedekiah (cf. Jeremiah 32:1), the last king of Judah before the exile. Yet the story is set in the post-exilic period and Nebuchadnezzar’s general, Holofernes, is said to come against Judah after they had returned from exile and rebuilt and re-consecrated the temple in Jerusalem:

When the Israelites living in Judea heard of everything that Holofernes, the general of Nebuchadnezzar, the king of the Assyrians, had done to the nations, and how he had plundered and destroyed all their temples, 2 they were therefore greatly terrified at his approach; they were alarmed both for Jerusalem and for the temple of the Lord their God. 3 For they had only recently returned from exile, and all the people of Judea had just now gathered together, and the sacred vessels and the altar and the temple had been consecrated after their profanation. (Judith 4:1-3. See also 5:18-19).

This is so obviously a distortion of history that any contemporary reader or listener would recognise that it wasn’t a telling of history but was rather a fictitious story using the names of well-known historical characters. Moore makes the point that it would be like telling a story which begins “Once upon a time, when Napoleon Bonaparte was king of England …” No reader/listener would think the writer had simply made a mistake – the errors are so huge (and there are so many of them) that it would be obvious that they were intentional and designed to mimic the style of historical narrative while serving an entirely different purpose. Almost everything about the book of Judith is ironic: it’s major and minor characters, several episodes and the overall plot are all ironic. A  number of scholars, including Edward Good in his classic work “Irony in the Old Testament” (1965), and Carolyn Sharp in her “Irony and Meaning in the Hebrew Bible” (2009), have identified several forms of irony in the Hebrew Bible, all of which abound in Judith.

The relevance of this to our consideration of Esther is that both books have features in common:

Similarities in style between Judith, Tobit and Esther suggest that the ironic “novel” may have been a known and accepted literary genre in the post-exilic period. All three books have post-exilic settings – Tobit is set in Nineveh following the Assyrian invasion, Judith is set in the Land at the time of an Assyrian/Babylonian invasion but also following the Babylonian exile, and Esther is set in Susa after the Babylonian exile (but being in the Persian period is after the decree of Cyrus and the return of many Jews to the Land). We can’t be certain about the date of composition for Tobit, but we can be confident that Judith was probably written between 135 and 107 BCE in the “Hellenistic” period, that is, the period after the Empire of Alexander of Greek was divided into four and Judea became part of the Syrian Seleucid Empire, and during the rule of the Hasmonean/Maccabean High Priest John Hyrcanus I. There are unmistakeable Hellenistic signs in the books and several clues that Judith’s defeat of Nebuchadnezzar’s general Holofernes may have been modelled on the defeat of Nicanor, a general of the Seleucid king Antiochus IV Epiphanes (described in 1 Maccabees 7:43-50). If so, the writer of Judith may have been “targetting” the Seleucids but using the names Nebuchadnezzar, Assyria and Nineveh as “codenames” for Antiochus IV Epiphanes and the Seleucid Empire. This certainly wouldn’t be unusual for biblical or Jewish literature of the time. The apocryphal book of 4 Ezra and the pseudepigraphical book of 2 Baruch are both set during the Babylonian seige of Jerusalem but describe the events of the Roman seige of Jerusalem. It was probably considered “safer” to avoid referring to one’s overlords directly and therefore using “Babylonians” as a code for “Romans”. The New Testament book of Revelation does something similar by using “Babylon” as code for “Rome”. So too the writer of Judith probably used “Assyrian” as code for “Syrian/Seleucid”.

This brings us to Esther. If this book is doing something similar then “Ahashverosh” and “Persia” may be codes for someone/something else.

[2] Although Aramaic and Hebrew fragments of Tobit have been found amongst the Dead Sea Scrolls this verse (Tobit 14:15) has not been preserved so I cannot check to see if it is the same Hebrew spelling as Esther’s Ahashverosh.